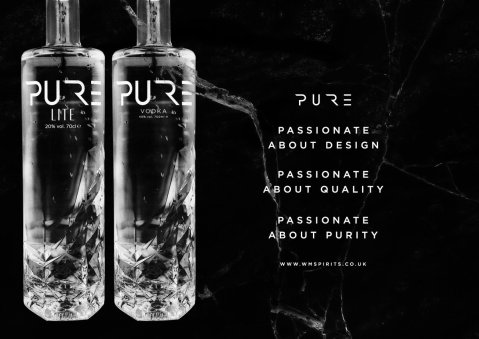 PURE Organic Vodka was launched onto the UK spirits market on 4th July 2019 with an exclusive boat party on the Thames. This exciting new product from WM Spirits soon made a splash around the country and secured drinks listings in bars and leisure venues such as the W Hotel, Cafe de Paris and Champneys Spa.

“ It was 2016, the time of the Instagram boom and the health and fitness, organic, vegan, ‘clean living’ craze. Drinks orders amongst the lads was moving away from pints to vodka soda & lime. I felt that there was more to this than just a change of drink and if it was happening in my local, I knew it would be happening elsewhere.” 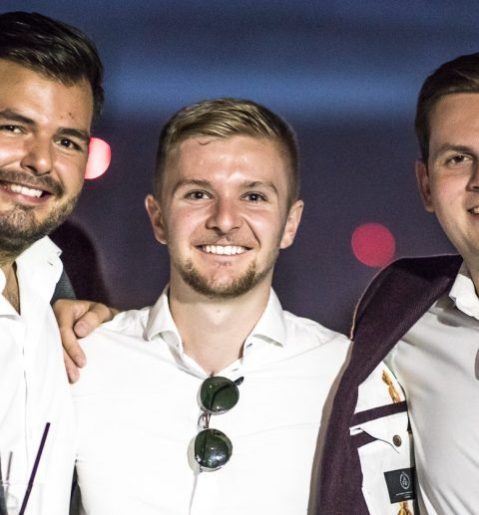 The Founder, Adam Player with friends, at the launch of Pure Vodka, 2019.

PURE was inspired by a health-conscious, environmentally friendly, social lifestyle: Organic, vegan friendly, gluten free, with no additives, preservatives, carbs or thickeners and as minimal calories as possible. Pure, indeed.

After this early success, to celebrate its first birthday in July 2020, WM Spirits created PURE Lite, a low calorie, organic vodka with just 20% ABV compared to the standard 40%. 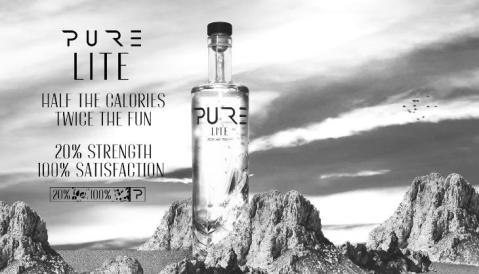 The launch of PURE Lite Vodka is timely and trendsetting, in response to an increased preference and demand for zero and low-alcohol beers, wines and spirits, with sales up 23% year on year. The growth comes as younger generations drink less alcohol and older people increasingly moderate their consumption.

PURE Vodka is an ultra-premium, clean, organic spirit, built on the foundation of high-quality raw ingredients and owing its unique taste to organic wheat.  The wheat is distilled to maximum purity removing any remaining impurities to create a light, smooth-tasting vodka.

This innovative brand has recently won a silver medal, competing against 83 entries in the 2020 Vodka Masters category at The Spirit Business Awards, less than two months after their 1st birthday in July. 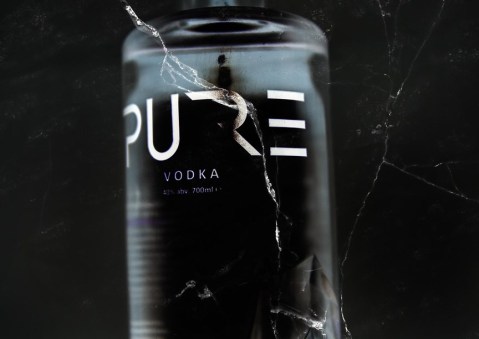 So, time to taste and test this new Pure Lite low alcohol vodka.

The name vodka is a diminutive form of the Slavic word voda (water), interpreted as little water:  Russia and Poland both claim vodka as their own invention, with the word ‘wodka’ recorded in Poland as early as 1405, a strong liquor of around 75% ABV.

The slender glass bottle of PURE Lite vodka has a decorative, crystal-cut design, like a classic Low Ball, Old Fashioned tumbler, used for serving neat spirits or a cocktail on the rocks. Comfortable to hold and practical for a firm grip. 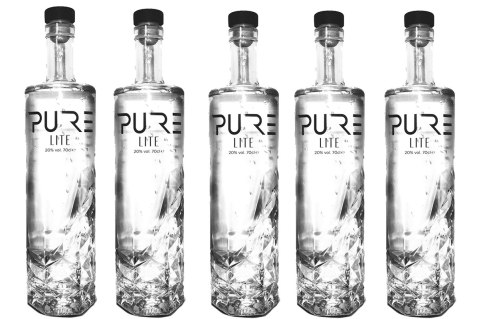 The term Martini was first listed Thomas Stuart’s guide, Fancy Drinks published in 1896, featuring a recipe for the Gin-based cocktail with vermouth and orange bitters.  This became a fashionable aperitif spreading from American bars to UK, France and Italy, notably promoted on the European travels of Hemingway and Fitzgerald.

For four decades, Ted Saucier was publicist for the Waldorf-Astoria Hotel, New York City, and in 1951 published a book on cocktails, Bottoms Up including the first recipe for the innovative Vodkatini. 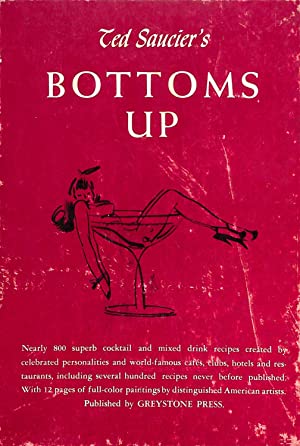 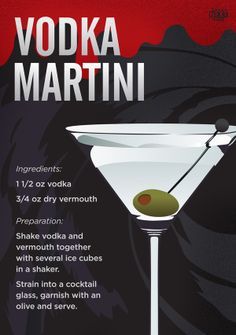 I would normally order a dry gin Martini, believing that the lack of herbal botanicals in vodka would not be such a flavoursome cocktail.  I was wrong. My PURE Lite Vodkatini had such a clean taste, deliciously dry  which hit the spot.

Through the 1950s and 60s, Vodka was a relatively new spirit being introduced in the States, marketed and promoted by celebrity entertainers including Benny Goodman, Harpo Marx and Woody Allen et al.

The classic Gin Martini was then literally shaken up by Ian Fleming at the Duke’s Bar, London where the novelist created the legendary, literary-inspired Vesper Martini.

The precise recipe for a Vesper is given by James Bond to the bar tender in the novel Casino Royale, (1953).

“Just a moment. Three measures of Gordons gin, one of vodka, half a measure of Kina Lillet. Shake it very well until it’s ice-cold, then add a large thin slice of lemon peel. Got it?”

“Certainly, monsieur.” The barman seemed pleased with the idea.

Be warned, the Vesper is a tad strong and at Dukes Bar – where this famous house cocktail is crafted and poured with perfection from freezer-chilled ingredients – the rule is a limit of two per person. This special Vodkatini is named after Vesper Lynd, Bond’s beautiful Girl in Casino Royale.

Vodka is also, of course, the key ingredient of a Bloody Mary, said to be the finest “hair of the dog” the morning after the night before. Almost one hundred years old, it was invented at Harry’s Bar, Paris, by Ferdinand “Pete” Petiot, combining vodka and tomato juice, allegedly named after the Hollywood movie star, Mary Pickford.

By 1934, Petiot had become head bartender at the St. Regis, New York, where he was asked to spice up the Bloody Mary for a customer and so added a few drops of Tabasco. The recipe was adapted over the years with Worcester Sauce, horseradish, (optional), a garnish of olives, lemon and a stick of celery to use as a swizzle stick. 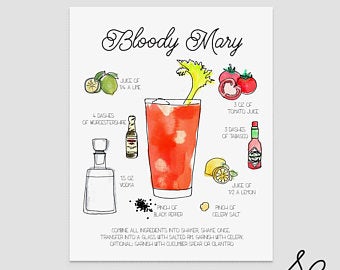 There is a fine tradition to sip a spicy Bloody Mary around 12 noon when at sea on a cruise ship. Tomato juice and lemon are an excellent source of Vitamin C and it’s either a refreshing, ice cold drink or a hearty, spicy drink, whatever the climate. 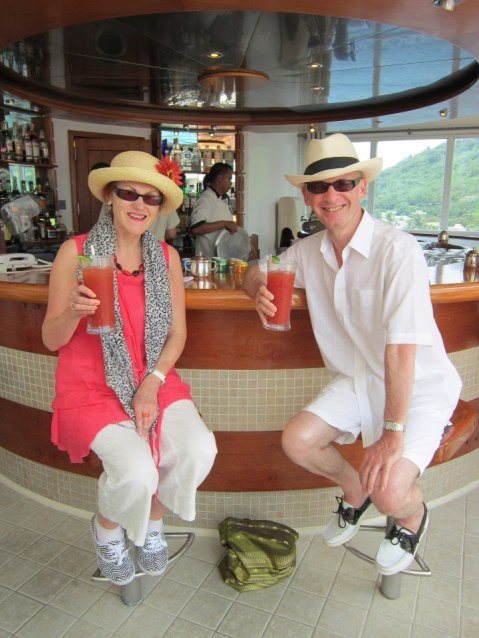 With Pure Lite Vodka, you would never realise the low alcohol content so the perfect, healthy, vitamin-rich cocktail.  The ideal partnership for a Sunday Brunch.

Being in the contemporary,  youthful lifestyle business, PURE has devised its own playlist  covering music genres from soul to pop, hip-hop and raps. Cool Sounds as you sip your Vodka cocktails.

To find out more about PURE Organic Vodka and the new PURE LITE vodka, places to drink and where to purchase, as well as cocktail ideas, take a browse around the website.