The definition of the verb Configure means to “arrange, design, adapt or put together in a particular form or order.”

Therefore Configurate is the most apt title for this inspiring showcase of highly imaginative, creatively crafted and configured artworks by four international artists.

Ivan De Menis from Treviso, Italy studied both graphic art at the Vittorio Veneto college and then painting at the Venice Academy of Fine Arts.  Here is a selection of his colourful square boxes, rectangle and oblong blocks composed in Mixed Media – such as polystyrene and air ball bubble wrap – on a wooden board.

A series of contrasting three-dimensional pieces called Tessera, each have a dominant colour – royal blue, pinky-coral, green and orange – on the front panel.

These have a marvellous silky smooth, luminous surface, in contrast to the abstract patterns on each sides, with the effect of dripping streaks of ‘wet’ paint.  For example, Tessera 1A9/y2 is mesmerising in its structure and surreal composition with the wildly expressionistic splash of purple, green orange like spray graffiti paint, splattered on an urban wall.

It would be difficult to choose just one of these attractive objets d’art,  while a row of two or three together on your wall would create a stunning diptych or triptych sculpture, as presented in the gallery. 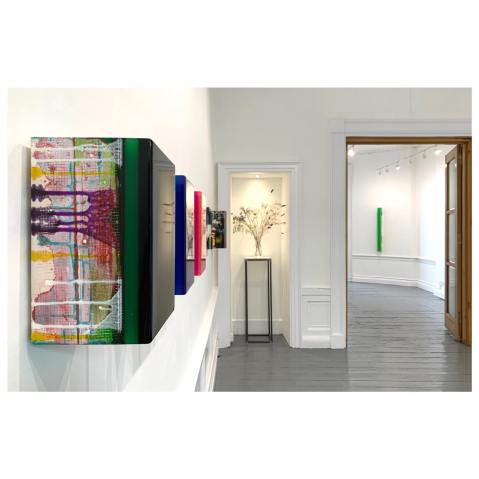 Jon Thomas is a contemporary artist & sculptor based in Swansea on the South Wales coast. Having studied 3-dimensional design at Sheffield Hallam University he now specialises in free standing, wall based sculptures using a range of industrial materials, Plaster of Paris, acrylic sheets, polystyrene and MDF board.  Recent work has been influenced by travelling to see and study the architecture of the Maya civilisation in Mexico.

Here is a diverse range of meticulously structured decorative artworks, illuminating sculptures in the true meaning of the word. Using translucent acrylic, Saturation Point is an amazing series of yellow and red square sheets on a marble base, like a row of CDs, which shimmer, glimmer and glow in the light.

Also most impressive is Untitled, a translucent blue polystyrene 3D block, which you can study for ages, peering inside to observe the complex design of layered triangular shapes.   This could certainly be the conceptual architectural model for an avant garde modern art gallery in Barcelona or Milan. 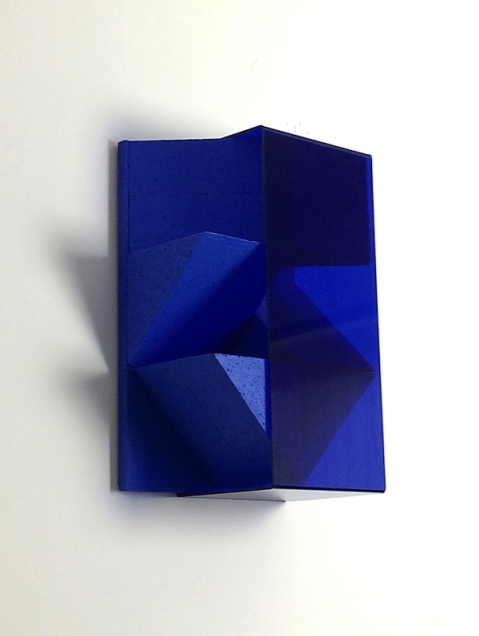 In more minimalist mode, Space Between, is a simple circle etched out of a yellow board of polystyrene and plaster, with dents and chips to denote its pliable texture.

Laura Jane Scott from London, is also immersed in experimenting with geometric form and interlocking sheets of MDF, Medium-density fibreboard, combining hard and soft woods with resins and wax to produce a hard-wearing but lightweight panel. For an artist, it’s the ideal adaptable material which can be cut to a preferred thickness and shape, with a smooth surface suited to painting resulting for a great polished veneer.

Form 20 is a series of nine separate MDF blocks in muted shades of ochre, sand, sky blue, racing green, taupe and black.  Although physically solid, these compositions are akin to the precision of neat folds of paper in Origami craftwork.

Several objects are entitled Perspective which neatly sums up Laura Jane’s vision creating these extraordinary structural designs of interlocking colourful sheets like a box file or shelf of surreal books. 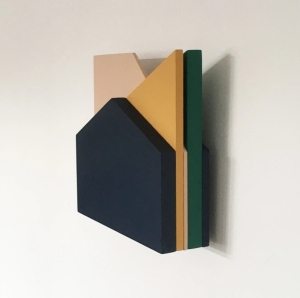 “My aim is always to express an idea as simply and as elegantly as possible. To strip everything back to only what is necessary to communicate that idea. My work is primarily an exploration of balance, of positive and negative space, of presence and absence.”

Andrew Clausen began his artistic training in his native California and then moved to Italy where he studied sculpture with artisan craftsmen. Currently living and working in the Netherlands, his selected medium is cast concrete layered onto resin bonded canvas for his architectural studies. 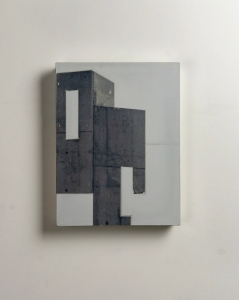 As in Bouwput, stone-grey is the dominant colour for this design of a modernist building, with the linear accuracy of a draughtsman. The graduation of shade and shadow gives the tonal effect of a soft background light and the viewer may be tempted to touch these ‘concrete’ sculptures to feel its apparent rough brick-like surface.

The structural contour of what could be a bridge in Van Nelle clearly evokes the density and strength of steel and concrete girders, illustrated with such detail. Clausen adds inkjet and pigment transfer images and text to the canvas, such that artistry is blended with technical mastery.  As in IPKW 1 (below), these are dreamlike compositions which cleverly transform the notion of hard industrial concrete into softly focussed, decorative designs of style and substance.