ART FAIR: an eclectic showcase of paintings, photographs and sculpture at the Dundas Street Gallery, Edinburgh

Since the mid 1970s, Malcolm and Lindsay Robertson, two of Scotland’s leading internationally renowned artists, specialising in Sculpture and Photography, have been collecting the work of their contemporaries.

The vibrantly colourful landscapes by Jolomo (John Lowrie Morrison, OBE), are recognised, and purchased by art lovers worldwide, with visitors often taking one of his iconic scenes of a white washed croft or loch view back home.  Among those buyers are Sting, Madonna, Simon Le Bon, Sophia Loren and Rick Stein.

Here there are expressionist paintings capturing remote places around the Highlands such as charming village of Tayvallich, Argyll (where he lives), Ben More, the pyramid shaped mountain near Crianlarich, and Grogport, a tiny Hamlet on the Kintyre coast overlooking the Isle of Arran.

Captivated by the natural beauty of the Scottish islands, Pam Carter takes you on a magical journey to her favourite places in Skye and Barra. In the gallery is a stunning painting, Eoligarry Bay, with its Carbibbean-styled white sand beach.  Also a fine view of Stein, a crofting township on Loch Bay, Waternish, Skye, a place to spot fabulous sunsets. 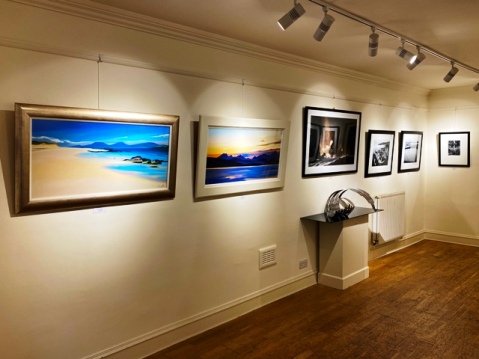 Between 1946 and 1958, the United States conducted 23 nuclear tests at the Micronesian atoll, Bikini. These experimental explosions on the atoll of Bikini inspired Dali to paint the Three Sphinxes of Bikini (1947). The original painting is in a Japanese museum but here you can purchase a signed print of this powerful image: a head, representing humanity, a tree for nature and mushroom cloud a symbol for destruction.

As well as these and other artists, the exhibition showcases the extraordinary work by the two brothers, Lindsay and Malcolm Robertson.

Lindsay Robertson has been a professional photographer since 1971, and his portfolio of black and white landscapes has been used in calendars and international advertising campaigns.  Having visited the George Eastman Museum of photography in New York, he as given the unique opportunity to bring the Ansel Adams collection to The City Arts Centre, Edinburgh in 2008. The showcase of Adams’ legendary landscapes was complemented with images by Lindsay, ‘Caledonia to California’ covering John Muir’s journey from Scotland to America. 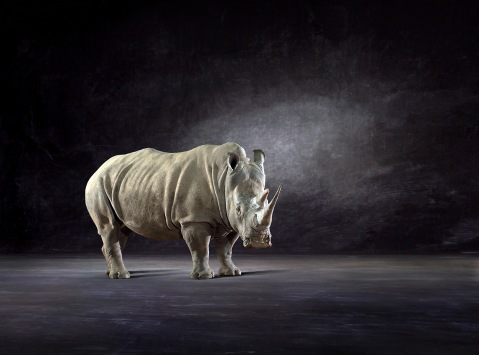 A most innovative project is his stunning series of animal portraits, entitled Endangered.  Just as a fashion photographer will snap a model in various poses in a Studio, here is a quirky line up of majestic animals – Giraffe, White Rhino, Elephant, Horse.  Far removed from their natural wild habitat here they are seen in close up, in the shadowy light of a Studio, expressing their beauty, strength and vulnerability. 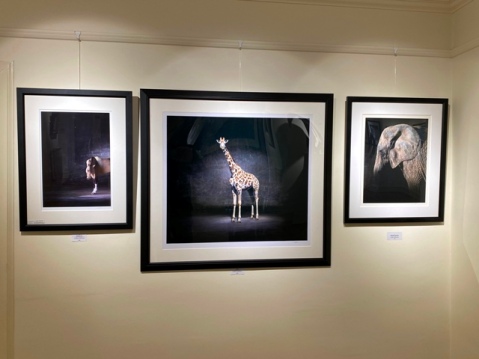 “ The starkness and scale of the background places the animals within an environment which seems surreal… thus inspiring us to study and appreciate the detail, textures and character.”  Lindsay Roberston

On a childhood family holiday to Yosemite National Park, Ansel Adams began his lifelong fascination with America’s wilderness. He is, says Robertson, arguably the most revered lanscape photographer in the world.

At the Dundas Street Gallery is his B&W print, Castle Rock, Summit Road, above Saratoga. 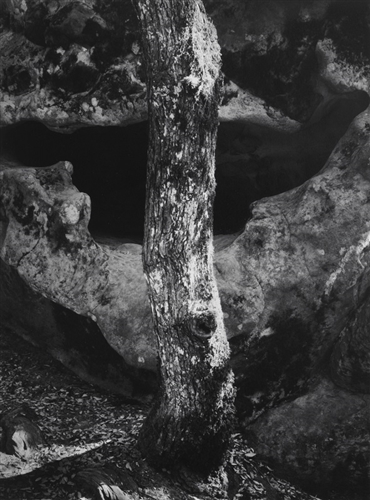 Malcolm Robertson studied sculpture at Glasgow School of Art and then took on a most important architectural role as Town Artist in Glenrothes, designing and producing site-specific sculpture and murals creating an artistic urban environment.

Malcolm is now based in both Scotland and Florida, receiving private and public commissions for large scale works. His Public art can be seen around the world, from Stornoway to India, such as ‘Oor Wullie’ in Dundee, and ‘Vortex’ World Rowing Championships, Sarasota. 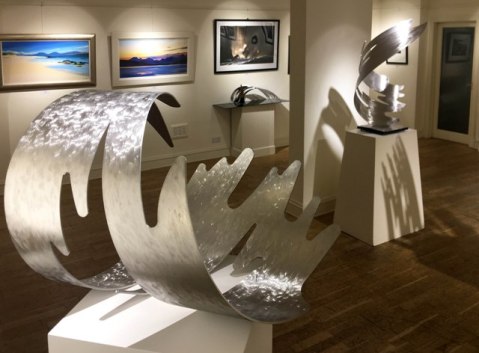 As part of this exhibition, there are maquette models and smaller sculptures, such as Flowing Wave, a sweeping curve in shining stainless steel and Eternal Connection, a most impressive design like a figure of eight “knot” carved in bronze.

The Robertson Collection of Fine Art is certainly eclectic and inspiring.  Take a visit to the exhibition soon. 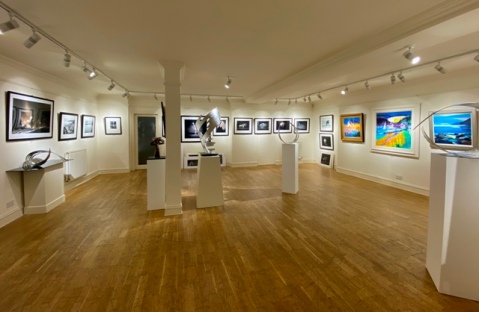