The Scottish Portrait Awards 2019: Every Face tells a Story in an exhibition of Fine Art and Photography

From the Mona Lisa and Marilyn Monroe to The Afgan Girl, the art of portraiture, by paint brush or camera lens, has created iconic, timeless images.  Out of hundreds of entries received for the 2019 Scottish Portrait Awards, the judges have shortlisted six portraits for the £5,000 Scottish Portrait Award in Fine Art as well as six works selected for the £3,000 Richard Coward SPA in Photography.  In addition there is £500 presented to the Young Fine Artist and Young Photographer Awards.

The Scottish Portrait Awards. established in 2017, is open to any artist aged 16 or over, born, living or studying in Scotland: fine art can be submitted in either 2D or 3D medium or alternatively black and white images for the Richard Coward Photography Award.

Here is a browse around a select few of the impressive shortlisted Fine Portraits:

Michael Youds graduated in 2005 with a first class degree in Fine Art from Lancaster University where he won the Agnes Eccles award for the most promising artist. Now based in Edinburgh, his paintings have been shown at the Royal Scottish Academy and Visual Arts Scotland.  An extremely diverse artist, he specialises in Still Life (quirky subjects from chocolate biscuits to Superhero toys) –  and Portraits, receiving commissions from Jack Straw, MP,  and John Leighton, Director General of the National Galleries of Scotland.  I was Blue, He was Red  is charming portrait of the artist with his twin brother David wearing the colours they were dressed in as babies so their parents could tell them apart. Dressed in shorts and T shirts, it’s a nostalgic homely scene as if they are back in their childhood. 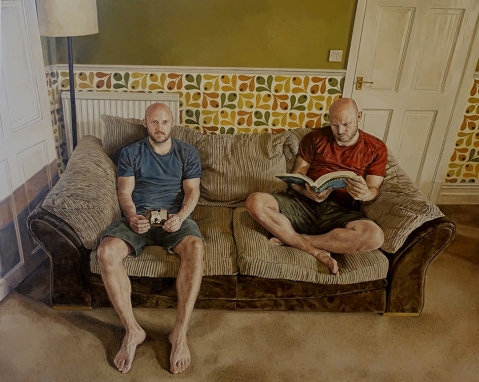 Michael Youds, “I was Blue, he was Red”

Li Huang studied at Duncan at Jordanstone college and his degree show focused on portraiture: “I paint artists from life instead of from photos …. and therefore depict sadness and perplexity in their faces. ..I like to establish an emotional contact between the figure and the viewer.” 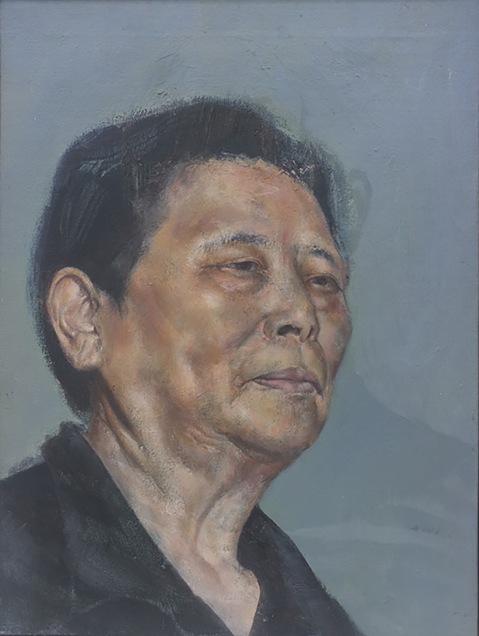 Kinship captures a truly emotional image of his mother depicting “her amiable and tenacious personality – always the motivation of my life.”  He returned to his family home in China for the summer vacation sharing stories and recollecting memories his late father.  He started the portrait of her there, completing it in his other home, Dundee.

Born in Australia, Mark Roscoe studied Fine Art at Duncan of Jordanstone College of Art. Following success at the 1998 BP Portrait Award he has established a great reputation as a portrait painter,  with numerous commissions for private and corporate clients. Awards include the Royal Society of Portrait Painters Ondaatje Prize for Portraiture and the Jackson Open Painting Prize.

Mark Roscoe’s Self Portrait 2019 has a backdrop of a brick wall, the artist is depicted with such intricate detail from eyebrows and designer stubble to smart casual fashion style,  staring seriously at the viewer.  “I’m wearing a Breton striped shirt as a nod to Picasso” he explains.  “I work from home so my paintings have to pass ‘the family test’. Our seven-year old daughter and five- year old son are both very critical of my work”. 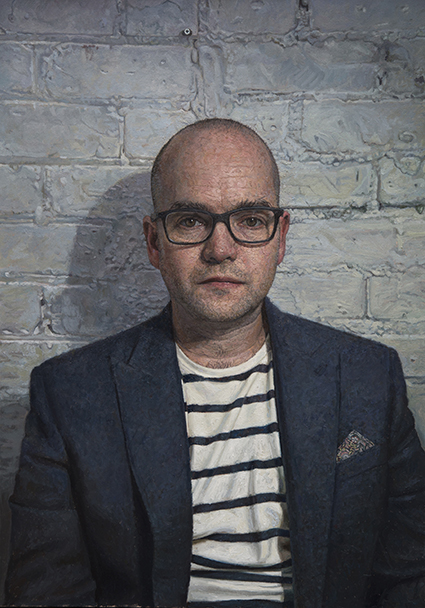 The other shortlisted artists for the Fine Art category are Robin Gage, Grace Payne-Kumar and Saul Robertson. 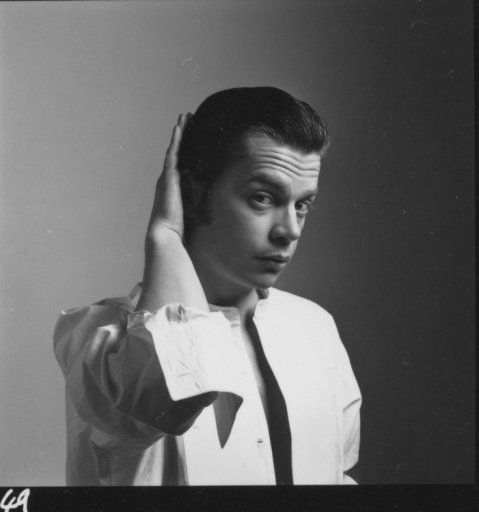 The SPA Photography Award is named after the late Richard Coward who started out as a fashion photographer working in black and white, but also added printmaking, abstract painting, etching and film-making to his skills, with a passion for literature, music, theatre and film.  After a prestigious career in London, in 2007 he and his wife moved to Edinburgh, a city Richard loved, and where he was vice-president on the committee of the Scottish Arts Club.  He died in 2014 aged 68, after a short illness.

“He had the talent, the sensitivity, the touch; there was a special something about his pictures; I have never been completely convinced photography is real art, but sometimes a picture touches me and I rethink my conclusion, and that is the sensation I had whenever I saw Richard’s work” – C J Fitzjames, Artist and friend.

A stunning selection of Photographs – with a real sense of sensitivity – are part of the SPA 2019 exhibition, such as the poignant, personal portrait by Brenna Collie, aged just 16. Entitled Trapped it depicts her tragic story of suffering from a sudden, serious illness.

“Two years ago, I suffered a stroke.  The pen torches shining into the lens of the camera represent the doctors examining me. It was invasive, confusing and terrifying, I felt ‘trapped’ in my own mind and body. This image also captures the very beginning of my life after the stroke. I had to relearn how to walk, how to be me again.”  Brenna Collie

Another young photographer is 21 year old Mark Shields. We have perhaps all noticed (and likely walked past and ignored), the men and women standing outside in the cold and rain, day in, day out, selling newspapers. Late News Final portrays one of these vendors who sold the Evening Times outside Central Station, Glasgow.

This street vendor is an increasingly rare sight as more newspapers move from print to the internet, downloaded and read on line.  With his lined, craggy face and beard, wearing a jacket and glimpse of a baseball cap, his hands tightly clasped, this is an image of a true hard working, “salt of the earth” character.

Jo Tennant took up her father’s camera when she was thirteen which began her film-habit, as she explains –  “A camera has been my faithful companion through life since. Love at first click: part art, part science, all to tell a story. My style is classic, timeless and documentary in style- relaxed and spontaneous rather than posed and uptight.”  She specialises in weddings to capture the detail, emotion .. a day of promise, joy and laughter.  Her entry for the SPA is The Eve of Women’s Day, an exhilarating snapshot of Jenny snapped on a winter’s day, the eve of International Women’s Day as she braves the elements and ice cold sea.

“This portrait of Jenny in the sea speaks of daring, joy, belonging” says Jo.  Such a lovely happy expression with a grinning smile, her features given a slightly fuzzy, out of focus image is most inspired, with a group of swimmers bobbing around behind her amidst the rolling waves.

Other exceptional photographs in the running for the award are by John Post, Ruby Rose O’Neill and Simon Murphy.

The winners of this year’s Scottish Portrait Awards for Fine Art and Photography will be announced on Wednesday 13 November, 2019

The exhibition of sixty portraits – including the twelve shortlisted works – is on show at the Scottish Arts Club, 24 Rutland Square, Edinburgh EH1 2BW from 2-30 November 2019. Open Monday to Saturday, 2 – 5pm.