First staged in 1951, Rodgers and Hammerstein’s “The King and I” is based on Margaret Landon’s novel, “Anna and the King of Siam”, based on the memoirs of Anna Leonowens, a British teacher who, in 1862, became the tutor to King Mongkut’s harem of wives and dozens of children at the Royal Palace Bangkok. 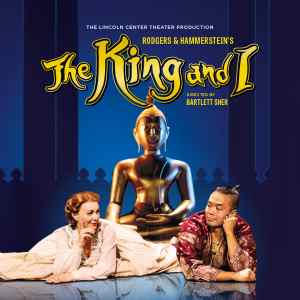 This Broadway revival in 2015 received four Tony Awards, a sell out season in London now on a UK and world tour.  As the melodic overture fades away, the shimmering gold curtain opens to reveal the stunning sight of Chow Phya, a paddle steamer “sailing” into Bangkok harbour, with Anna and her young son Louis on deck.

Anna and Louis arriving into Bangkok harbour by paddle steamer

Greeted as “Sir”, by the Prime Minister, she realises the problem of an educated English lady fitting into the patriarchal society of Siam. The King retains strict rules of hierarchy in his court where everyone must kneel before him. Anna is astounded that she must live in the palace and treated like a servant – what ensues is a conflict between Eastern and Western culture and sexual politics.

A procession of the princes and princesses come to meet their governess, most of them obediently bowing to their father, except for two little girls who skip around with mischievous giggles – the ensemble of cute Royal children are delightful to observe.

Anna and the Royal children

Annalene Beechey captures Anna’s feisty yet feminine personality with period elegance, a strong independent mind and sense of fun; with such clarity of diction and vocal range, her performance is impeccable.   Her son Louis is played with such a cool, confident manner by Joseph Black, a young Victorian gentleman in his tailored, tailcoat suit.

Jose Llana portrays the King with arrogant, majestic swagger but his musical soliloquy, “Puzzlement” reveals private doubts about following ancient traditions and his harem of women in modern society.  Anna is infuriated by his chauvinistic attitude, accepting a slave girl Tup-tim as a gift from the King of Burma, as she expresses in song:

You think, like ev’ry woman, I have to be a slave or concubine.
You conceited, self-indulgent libertine! … I do not like polygamy or even moderate bigamy!

If she cannot educate the King to understand western civilised values, she can teach his wives and children English, science and geography. Showing them a world map, they are astonished to see how small Siam actually is in comparison to the vast continents across the globe.

A geography lesson for the Royal children

The King is keen to listen and learn too and after hearing the expression “etcetera, etcetera,” he repeats it at the end of every sentence with joyful hilarity.  As a theatrical narrative with musical interludes, the dialogue is peppered with wonderful humour as we observe their entertaining battle of wills and sharply observed wit.

“The Small House of Uncle Thomas”  is a stunning work of choreography by Christopher Gattelli,  based on the original ballet by Jerome Robbins, with a parade of exotic costumes and well crafted characterisation through mime and movement. Rather like the Mousetrap in Hamlet, this play within a play reveals Tuptim’s views of slavery to catch the conscience of the King.

The palatial, quick changing, set takes us from the Royal Court to the garden, schoolroom and Anna’s boudoir, each scene designed with ornate furnishings, pillars, drapes, flowers, lanterns and a giant gold Buddha.

A highlight of the show is, of course, “Shall We Dance?” when the King and Anna , in a magnificent crinoline gown, twirl, swirl and whirl around the ballroom in a breathtaking, fast paced polka.

Shall We Dance? asks the King

Richard Rodgers and Oscar Hammerstein II were the dream team during the golden age of American musical theatre – the Mozarts of the 20th century. The lyrics drive the plot forward, enhancing characters within the storyline and developing the storyline into a strong drama.  A fourteen piece orchestra perform the sweeping melodic score which flows seamlessly along.

Here are all those familiar, timeless songs – “I Whistle a Happy Tune”,  “Hello Young Lovers”, “Getting To Know You”  – and a lovely rendition of “Something Wonderful” sung with such passion by Cezarah Bonner as Lady Thiang.

“I doubt I’ll see a better production in my lifetime” said the Wall Street Journal and it’s perfectly true. Directed by Bartlett Sher with imaginative, dramatic vision, taking us on a magical, dreamlike journey to 19th century Siam.

Nearly seventy years since its premiere, this is a spectacular show enriched with lavish, lush theatricality, song and dance,  sweet romance and oodles of Broadway pizzazz. In a word, faultless.

Annalene Beechey and Jose Llana as The King and I.