It was in June, 2004 when Jamie Primrose, launched his first solo exhibition at the Dundas Street Gallery. That inaugural showcase of his distinctive city streets and seascapes was the start of bi-annual events, which this month celebrates the 15th anniversary.

“Moments in Time” features sixty paintings selected from 2004 to 2019, as a colourful and enriching retrospective, focusing especially on dramatic observations of sky, sun and sea, day and night from sunrise to sunset.

The tranquil beauty of East Lothian is illustrated by painterly panoramas of wide, sandy beaches,  the sweep of the bay at North Berwick with the grey crag of the Bass Rock out at sea.

“There began to fall a greyness on the face of the sea; little dabs of pink and red, like coals of a slow fire.

With the growing of the dawn I could see it clearer and clearer, the straight crags painted with sea-birds’ droppings like a morning frost, the sloping top of it, green with grass.”

This quotation so aptly describes the colour palette of pink, grey and white oils in these paintings of the Bass Rock and North Berwick.  Like RLS, I loved spending summer holidays and days out in North Berwick as a child. This peaceful seaside resort has hardly changed.

What is so impressive is how Primrose perfects meteorological realism of floating, fluffy clouds across the wide expanse of sky.

Looking towards the Bass Rock from North Berwick

Winter skies over the Bass Rock

Further along the East Coast towards Edinburgh, there are views of Portobello Beach, majestic structures of the Forth Bridges and the quaint village of Cramond.

Travel on to the North West Highlands near Oban, gateway to the Hebrides, for the great escape to the wild, empty shores of Loch Melfort, Port Appin and Lismore. 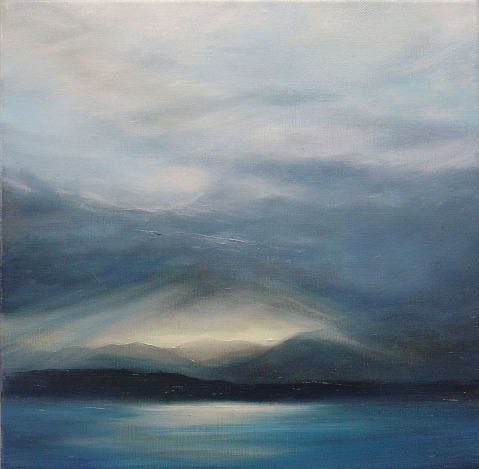 A series of stunning  seascapes depict endless skies, shimmering shapes of distant islands and the rolling hills of Mull on the horizon.  With such exquisite quality of light, streaming through stormy clouds, you can easily imagine standing there on the shore, tasting the salt sea air blowing in the breeze.

Next take a trip to the south of France – suitably known as the Cote d’Azur – where for generations of artists, from Picasso and Peploe to Primrose, the Tiffany-blue sea under a  glistening glow of light, has been a constant attraction.  Feel the warmth of the summer sun in scenes of the charming resort towns of Antibes, Nice and Villefranch, bathed in a pale pure light.

Further along the coast is the Italian Riviera with the colourful historic towns of the Cinque Terre, such as “Late Afternoon at Manorala”  perched on the cliff top surrounded by verdant vineyards.

Portofino, known as a summer playground for wealthy lifestyle and leisure, curves around a half moon bay, the harbour lined by super yachts and fishing boats, beside a row of designer shops, bars and restaurants.

The American journalist Robert Benchley sent a celebrated telegram to his editor at the New Yorker after arriving in Venice for the first time: “Streets full of water. Please advise.”  He obviously had no prior knowledge of this historic city of islands!

Regarded as the most romantic city in the world, the meandering, unchanging waterways of Venice have inspired writers and painters over the centuries to capture its mesmerising magic.

“Last Light on the Grand Canal, Venice” is a magnificent scene composed with such clarity in subtle shades of terracotta, cream and ochre: graceful palazzos, arched windows and church domes in a perfect perspective is a work of architectural draughtsmanship.  In the centre, the Grand Canal shimmers in this quiet moment before dusk. 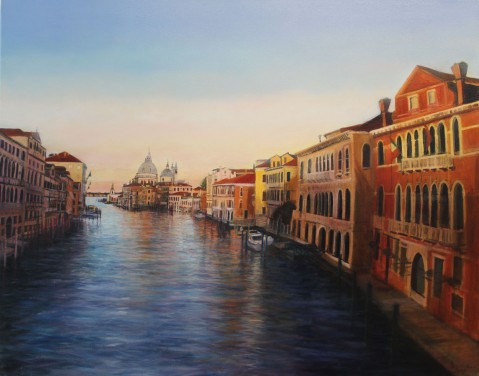 Here too are iconic images of the Thames flowing through London, magical, moody studies with Turneresque tones in soft shades of blue and grey.

Light falling on the Thames

This collection of oil paintings by Jamie Primrose highlights with meticulous detail, the subtle nuances of sun, light, shade and shadow, which he has developed over the past fifteen years, into his own masterly artistic style.

“For me a landscape hardly exists at all as a landscape, because its appearance is changing in every moment, but it lives through its ambience, through the air and the light, which vary constantly.”—Claude Monet

Do visit the Dundas Street Gallery soon to experience a marvellous tour around these dreamlike destinations from Scotland to La Serenissima, each composition captured with such a serene sense of place and intangible timelessness.

For more information on this work, private commissions and prints, see www.jamieprimrose.com