The Edinburgh Festivall Fringe is just as much about a summer party atmosphere, drinking and socialising with friends, as experiencing a rich cultural feast of arts, comedy, theatre and music.

Innis & Gunn, the independent master brewers of Scottish craft ales has built up an enthusiastic fan base over the past decade. Spring 2014 saw the opening of their new HQ in a grand townhouse at 6 Randolph Crescent, West End, Edinburgh. This venue is used for private and corporate parties, tutored food and drink tastings and hospitality events. 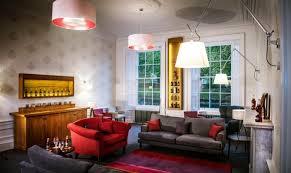 The Georgian drawing room at HQ

A few months ago, I was invited to experience a media launch at the HQ where we heard the fascinating story of how Innis & Gunn was founded in 2003 (named after the middle names of Dougal and Neil Sharp). Specialising in oak aged, craft brews, I&G has won many awards, is the top ale brand in Sweden and the best-selling British bottled beer in Canada.

I am not a regular beer drinking, but my goodness did I enjoy learning how to nose, pour and finally taste a selection of ales, starting with the Original Oak Aged beer.  ” Aromas of vanilla, hints of citrus, with a malty, lightly oaked, soothing and warming in the finish.” says one review, but this sums it up in a nutshell, ” Absolutely the best beer I’ve ever tasted. It’s like a slice of heaven poured into a bottle.!    Try it and see for yourself…. 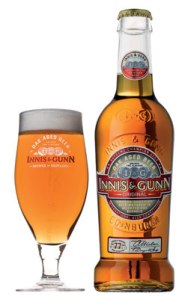 I did enjoy tasting the distinctively smooth Rum Finish, ( which I describe as like a classy  Caribbean rum punch in a bottle),  and the new Scotch Malt Whisky Trail with its rich, mellow, smoky flavour. 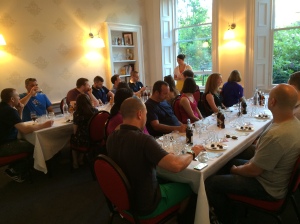 Guests are offered a beer on arrival in the Drawing room, to entice mixing and mingling and a party atmosphere. Then join in an informative but fun tutored tasting session with four different Innis & Gunn beers.

Test your beer knowledge with a quiz and if you wish,  and after the official part of the evening, continue dowstairs in the Beer Kitchen (pay bar),  to sample a few more ales, perhaps some rare bottlings. The chance too to ask the expert bar tender everything you wanted to know about beer but were afraid to ask. 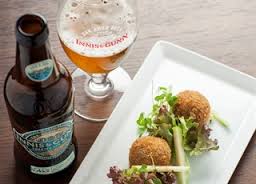 The I&G Beer and Cheese pairings is a fantastic foodie experience. I’ve sampled for instance, I& G Original with a chunky slab of Isle of Mull Cheddar, Smokin’ Gunn with a salty slice of Pecorino Aragonese and my favourite Rum Finish complements the tangy Strathdon Blue cheese. 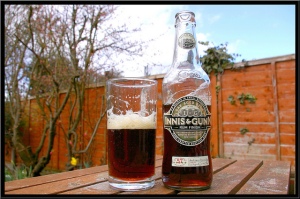 After the Bites and Beer session, you may end the evening in the Beer Kitchen for a final pint or two of your favourite ale in typical Festival party manner.

These Festival Fringe events at Innis & Gunn HQ sound like a great night out.